Fire Behind the Curtain 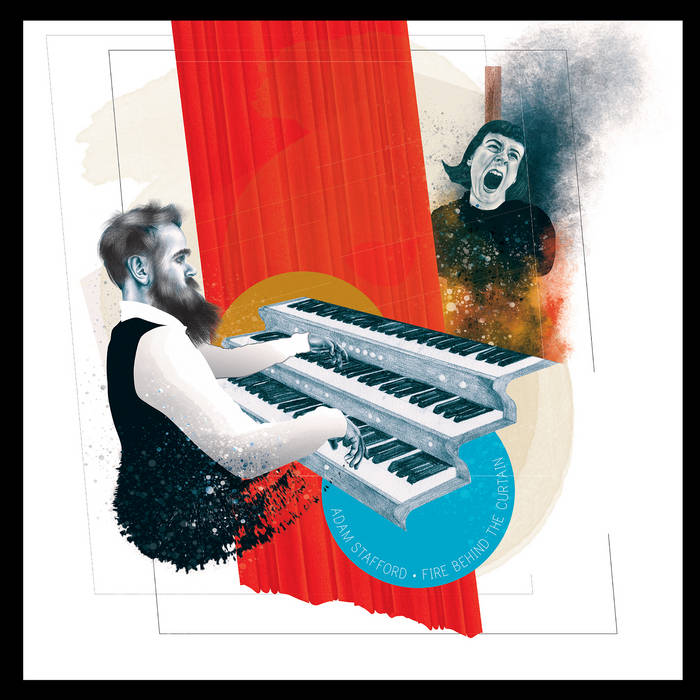 Adam Stafford's new LP 'Fire Behind the Curtain' will be released on double gatefold vinyl on Song, By Toad in May 2018.

Empty oil tankers. A haunted sponge cake factory. A housing estate on the edge of an industrial wasteland. Adam Stafford's memories of his childhood home in Falkirk could easily be the premise of a coming-of-age horror movie, or a setting for a Celtic noir drama. Perhaps not entirely surprising for an artist whose very first film picked up no fewer than seven major awards, including two Oscar-qualifying festival accolades and a Scottish BAFTA.

But Adam's prolific career in music and film have come out of a lifelong struggle with severe dyslexia and depression. Unable to write or read until the age of 10, he threw himself into music as a way of escaping the drudgery of lessons and bullying at school. Music was his passion and a subject he did well in despite not being able to read notation. This was also the time when Adam played in a number of punk garage bands, one of which was the ill-fated Chuck Norris Machine - an improv collective whose one and only gig in a biker's club was so loud, it earned them a lifetime ban.

After the trials of school years, Stafford's film career happened by chance. A friend making a documentary asked him to write a soundtrack and offered to return the favour by producing and shooting a short film. The Shutdown was filmed in one night with the budget of £50 for petrol money. It ended up doing the festival circuit for two years.

To date`Adam Stafford's amassed an impressive body of work in both music and film. His numerous achievements include a Scottish Album of the Year-nominated solo album Imaginary Walls Collapse, video direction of The Twilight Sad's 'Seven Years of Letter' and an experimental tape-collage Miniature Porcelain Horse Emporium.
Famed for his mesmerising performances on stage, he's played alongside Warpaint, The Twilight Sad, Norman Blake, King Creosote and Ela Orleans.

Recently, Stafford has been leaning towards more experimental compositions. Reverse Drift (2017) is an art presentation comprising of 24 photographs and a single 40-minute improvised track. The same year he released jarring lo-fi synthesiser/Gamelan configurations on a 3-track EP, Torments Through Supernatural Flogging.

Recorded in the Song, by Toad HQ, The Happiness Hotel, the latest addition to the Adam Stafford opus is Fire Behind the Curtain. The neoclassical L.P. is a "testament of hope" in his battle against depression. It was written over an eight- year period and inspired by Adam's love of Meredith Monk, Michael Gordon and US Minimalism. Adam gives a preview of his latest avant-garde musical expedition: "Choirs yelp and screech, beatboxing courses through cosmic k-holes and guitars sound like saxophones trapped deep in the wasp-machine."

Strings Performed by The Pumpkinseeds:

Additional Vocals on The Witch Hunt and Holographic Tulsa Mezzanine by Jo Foster.


Cover illustration and portrait by Paul Ryding. Label photography by Jon McCall and Stafford.
Design and layout by Matthew Young and Stafford.

This album recording was made possible with help from Creative Scotland's Open Project funding scheme.

Dedicated to anyone who has ever been hungover, down-and-out, running from themselves, running for their life, trapped in prisons internal/external.