by Song, by Toad Records 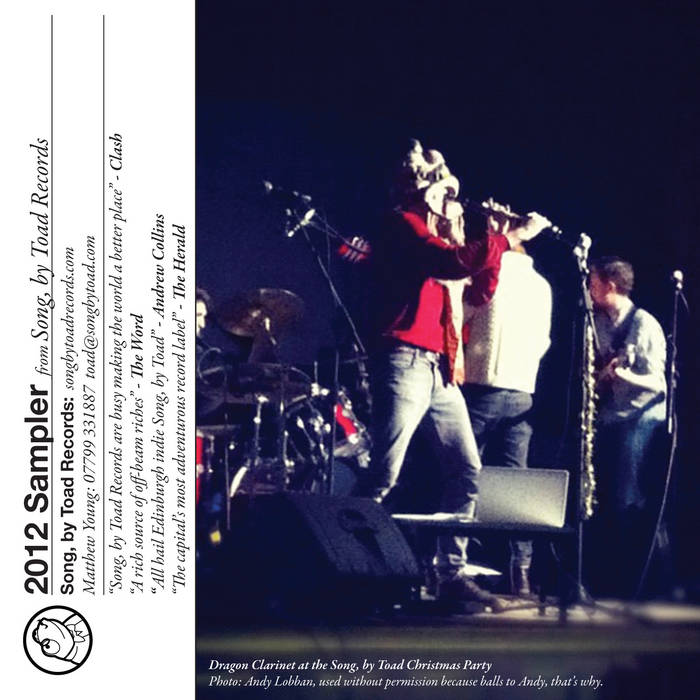 “Song, by Toad Records are busy making the world a better place” - Clash
“A rich source of off-beam riches” - The Word
“All hail Edinburgh indie Song, by Toad” - Andrew Collins
“The capital’s most adventurous record label” - The Herald

Song, by Toad Records hereby release into the world what we reckon is going to become an annual free sampler, mostly as a free download, but with a few CDs given to local record shops and available at gigs as well. The sampler is a combination of things we’ll be releasing this year, mixed in with a couple of things from 2011 and interspersed with a few brilliant moments from the late Kenneth Williams’ reading of the Wind in the Willows. Snippets from this reading litter my own weekly podcast, and inspired the name of the label in the first place, so it seemed kind of fitting to pop a couple on here.

02. So the Wind Won’t... by Jesus H. Foxx
I’ve been waiting for their debut album through two years of ‘nearly theres’, but it is finally finished, it sounds brilliant and will be ready for release on 14th May 2012.

03. Twitching Stick by The Leg
Formerly Khaya, then Desc, The Leg are veterans of several Peel Sessions and several releases already, but have agreed to release their next album An Eagle to Saturn with us. Coming out on 30th April, this is abrasive as fuck, but definitely still surprisingly poppy, considering.

04. The Acid Test by Rob St. John
We released Rob’s debut album Weald on vinyl last year, and the response was so overwhelmingly positive we’ve decided to give it a wider release on CD too. Rob being Rob, of course, he’s already planning to record his second album, probably in our living room again.

05. Sorry by Waiters
06. Teenage Bloom by Dolfinz
08. Gay Marriage by Sex Hands
On the subject of recording in our living room, the Waiters, Dolfinz and Sex Hands tracks are from a split 12” (which will also include hotly-tipped* Glasgow band PAWS) all of which was recorded almost entirely live in the living room of our house by myself and Rory Sutherland from Broken Records. It’s sort of a compilation of some of my favourite underground, garagey (and frighteningly young) bands, and we’ve just had it mastered, so it will hopefully be ready for release in late March or early April.

09. A Mother’s Arms (demo) by Meursault
It feels like we’ve been waiting quite a long time for the third Meursault album too, doesn’t it. Well it's finally done, and we are looking at a release date in mid-July, with a release night pencilled in for Saturday 7th July in the Queen's Hall.

10. School (Toad Session) by The Black Tambourines
We recorded a Toad Session with these guys last year and immediately offered to release something. I’m not sure what it’ll be yet - probably an EP in the Autumn I would guess.

11. Lay Me Down by Yusuf Azak
From his unspeakably gorgeous second album, due out in 2012 sometime, depending on when I get a final master.

12. That is a Big Door! by Trips and Falls
From their second album, People Have to Be Told, released in September 2011.

13. Dead Golden Girls by Lil Daggers
From their self-titled debut album, which we released on vinyl at the end of last year.

14. Pinkening by Animal Magic Tricks
This was recorded just after 2009’s stunning Cold Seeds album, which was a collaboration between Frances from Animal Magic Tricks, Pete Harvey and Neil Pennycook from Meursault and Kenny Anderson from King Creosote. There still isn’t what you could describe as a finished version, but I am not giving up hope because it is a gorgeous album, even just as it stands at the moment.

15. Pool Attendant by The Japanese War Effort
This is from 2011’s Summer Sun Skateboard, and we hope to release another mini-album with Jamie in the Autumn of 2012.

18. Movies and Magazines by King Post Kitsch
A free dowload from kingpostkitsch.bandcamp.com After a year in Glasgow, Charlie has moved back down to London, and after his awesome debut The Party’s Over in early 2011 I am eagerly looking forward to new material.

*Yes, I know I said ‘hotly-tipped’, but honestly, they are, I’m not just copy-and-pasting from The Big Book of PR Clichés.