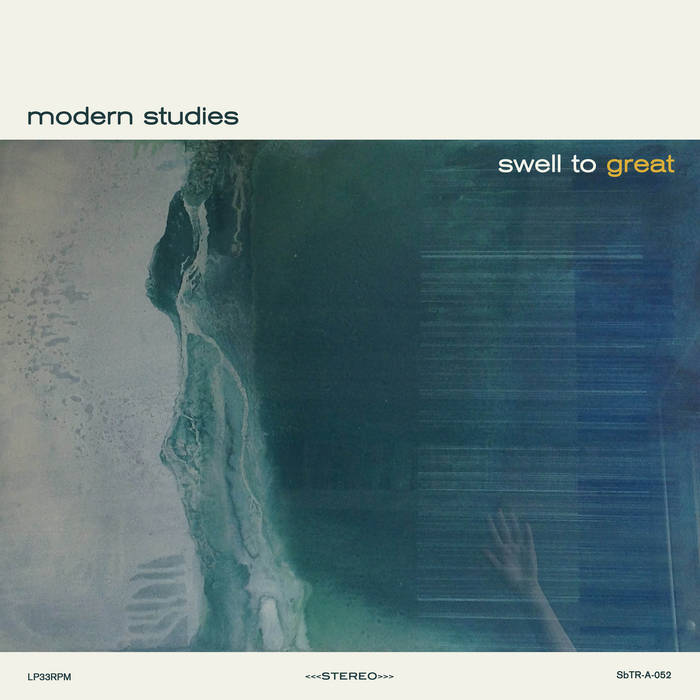 "there is a calmness in its melancholy, a beauty in its blues. These are songs that see the mystical beyond the material, abstracted folk ballads awash in memory"
**** MOJO (Sept 2016)

"this is a treasure trove of songs that embrace, and transcend, place and time"
**** The List

Modern Studies are a chamber pop band from Glasgow-via-Yorkshire. Their quietly experimental landscape songs are played on analogue synths, cello, double bass, drums, guitars, a wine-glass orchestra and, at the creaking centre of things, a Victorian pedal harmonium.

Working throughout the year at Pumpkinfield – Pete’s rural Perthshire studio – the band shaped a set of Emily’s skeleton songs, drawing largely from the salt and spray of the sea. This communal arts-und-crafts-werk resulted in their debut LP ‘Swell to Great’ (named after a stop on the wheezing old harmonium), which will be released on Song, by Toad Records of Edinburgh, Scotland in September 2016.

The band also began an ongoing collaboration with London-based label Earth Recordings in 2015, contributing a Shirley Collins cover ‘The Bold Fisherman’ to the ‘Shirley Inspired’ tribute LP. More releases with Earth are planned for later in the year.

Modern Studies will play a selection of UK shows and festivals throughout 2016.

A recent past, a decade ago.

A Belfast-born Victorian harmonium is entrusted to the care of Glasgow chamber-folk singer Emily Scott. It looks like it should sound: imposing and statuesque, ornately carved with wax-dripping candle holders, organ stops with enticing names and elaborate levers, yet the years have taken their toll.

The ‘mouse-proof’ treadles are mended with gaffer tape. Its breathing is choked and laboured; a ridiculous amount of pedalling is required to produce even the simplest melody. Most of the keys don’t sound; some muster but a grim rattle. Those tones which can be coaxed from within are off-key in one way or another.

And yet, they fall in love, and conspire together to bring about a skeletal cluster of musical fragments. Slowly but surely the harmonium gives up its provenance. Cigarette cards of moustachioed soldiers tucked between the keys, a Miss Havisham drape of cobwebs, a selection of foxed and edgeworn song-sheets, and a short hand-written history of a short life.

A distant past, a century ago.

A Belfast-born Victorian harmonium is entrusted to the care of Daisy Skelly, a music teacher with a sweetheart lost to the Great War, and who would succumb to typhus in her mid-twenties.

Early 2015 and the harmonium migrates to Pumpkinfield, a studio in rural Perthshire. It becomes the thing around which a constellation of people, instruments and ideas begin to orbit. Fragments become lines become songs.

Written by Emily Scott, arranged by Emily Scott and Modern Studies, recorded and mixed by Pete Harvey and mastered by Reuben Taylor.